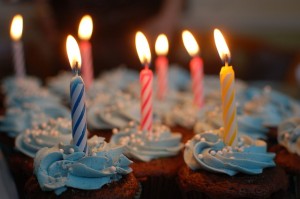 The Dutch have developed the strange habit of also congratulating family members and friends of the birthday boy/girl. We don’t know why 🙂 So do not be surprised if this happens to you. However, it seems this is changing a bit as an increasing number of people realize it is in fact strange and stop doing it.

The day on which you were born is “geboortedag”, but usually you will see “geboortedatum” (“date of birth”) when filling out forms etc.

– “Koninginnedag is niet de echte verjaardag van Beatrix…want zij is jarig op 31 januari…”
(“Queen’s Day is not Beatrix’ real birthday…because her birthday is on January 31st…” Beatrix honors her mother Juliana who had her birthday on April 30. Obviously the weather is also a lot better in April 🙂 )

Expression:
– “Abraham/Sara zien”: literally “to see Abraham/Sarah” this is said
when one reaches 50 – Abraham for the male and Sarah for the female.
You will see this on birthday cards or on decorated office doors.

Related words:
– “Jarig“: No literal translation. “Jarig” is the adjective that indicates the state of one having one’s birthday.
– “Geboortedag”: day of birth, sometimes also “anniversary”.
– “Vieren“: to celebrate.
– “Feest“: party.
– “Viering”: celebration.