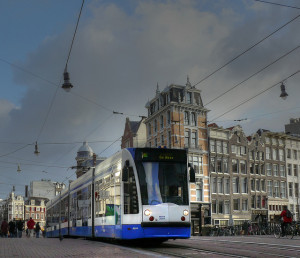 The “tram” is a very common means of transportation in some of the bigger cities in The Netherlands. It is a vehicle, conducted through rails, for short distance transport of passengers, with a maximum speed of approximately 50 km/h.
(Photo by Maurizio Mori (flickr.com) – some rights reserved.)

You can turn “tram” into a verb by adding -en. The verb “trammen” translates to “to go by tram”, but is more common to say: “met de tram gaan/reizen” (“to go/travel by tram”).

When riding your bicycle you have to be careful when you try to cross the tram tracks; you are in big trouble if your front wheel is caught in the rails!

Expression:
“Onder de tram komen.”
(Literally: “To wind up under the tram.”)

This expression can often be heard in project meetings where it is used to express fear of losing corporate knowledge.

Example:
“En wat gebeurt er met het project als Frank onder de tram komt?”
(“<worried:> So what happens to the project if Frank winds up under the tram/if he’s hit by a tram?”)