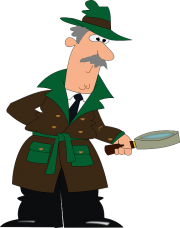 This word is composed of “mieren” (“ants”) and “neuker” – derived from “neuken”. Originally “neuken” meant “to knock / thrust” but is currently only known in its translation of “to f*ck”. That’s why some people may consider “mierenneuker” to be foul language. Although its use is mostly informal, this word is not meant to have an offensive connotation. In fact, a man was acquited after charges were pressed against him for calling a traffic warden a “mierenneuker”, see also Extra.

The related verb is “mierenneuken”: to nitpick.