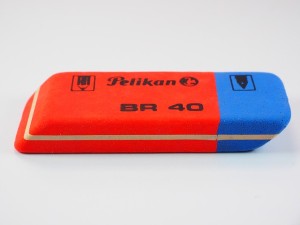 This word might lead to some confusion: the English ‘gum’ is ‘gom’ in Dutch, and ‘chewing gum’ is ‘kauwgom’. But when your ‘gums’ are swollen, we talk about ‘tandvlees’ (‘tooth flesh’). The Dutch will also say ‘stuf’ instead of ‘gum’, but when you want ‘stuff’ as in ‘drugs’, you just ask for what you want 🙂 Ok. And to our American-English readers: the equivalent for ‘rubber’ in Dutch would be ‘kapotje’, but people usually just talk about a ‘condoom’.
Now that we are clear on the subject, let’s move on to the Examples. We’ll use ‘eraser’ in the translations in order not to be funny.

Examples:
– “Mag ik even je gum lenen?”
(“Can I borrow your eraser?” Here ‘even’ means ‘for a short while’ which is more or less implicit, but it also makes the request sound friendlier.)

– “Sh*t hee, ik heb geen gum bij me. Wat nu?”
(“Cr*p/b*llocks, I forgot an eraser. Now what?” The use of the word ‘sh*t’ is very common in informal speech. Some parents encourage their children to say ‘ships’ instead, which would be the Dutch pronunciation of ‘chips’ (as in ‘potato chips’ or ‘crisps’).)