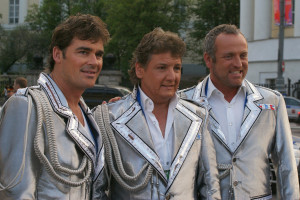 “BN’er” is the abbrevation of “bekende Nederlander”: well-known or famous Dutchman/Dutchwoman. The word means exactly what is says: if you are famous or well-known by the general Dutch public and you are Dutch, then you are a “BN’er”. Read more about “BN’ers” in the Extra below.
The photo shows BN’ers Jeroen van der Boom, René Froger and Gordon.
(Photo: “De Toppers 2009” by Daniel Kruczynski – De Toppers. Licensed under CC BY-SA 2.0 via Commons.)

The Dutch will also frequently speak of “bekende Nederlander” instead of using “BN’er”.

– “De groep met BN’ers heeft gisteren redelijk gescoord in de ‘Nationale IQ test’.”
(“The
group of “BN’ers” scored reasonably well in yesterday’s “National IQ
test’.” Last night the “Nationale IQ test” (national IQ test) was on TV
and
the audience was divided into a number of groups (representing
professions or social societies / sport clubs) and one of the groups
was the group with “BN’ers”. The lowest scoring “BN’er” was Jody Bernal
(96), the highest the politician Diederik Samson (136).)

Extra:
Abroad “BN’ers” are mostly unknown apart from some actors or
directors (for example Famke Janssen, Rutger Hauer and Paul Verhoeven) and the few who
have managed to cross the Dutch-German border (such as Rudi Carrell and
Linda de Mol).
Most “BN’ers” are known from television and live pretty close to the
television studios in Hilversum and Aalsmeer. The region where many
rich “BN’ers” live is called “Het Gooi”, and is roughly located in
between Amsterdam and Utrecht. Many contestants in television shows such as “Big Brother” and its rip-off “De gouden kooi” (The golden cage), “Idols” and “Holland’s next topmodel” hope to become a “BN’er”.
On the other hand, a lot of recent television shows try to make “BN’ers” even more famous by having them participate in dance or ice-dancing contests (“Dancing with stars“, “Sterren dansen op het ijs”, etc.) or reality-tv shows, for example with the singer Frans Bauer. Then we have the usual gossip programs on TV (for example RTL Boulevard and just about every Dutch-spoken show on commercial channel SBS6).

Recently, “BN’ers” have started to increase their fame by publishing
magazines carrying their name: Linda de Mol was the first one.
If you want to read everything about “BN’ers”, your hairdresser could be the place to be; while waiting you can read all the gossip
magazines that you don’t have at home (Privé and Story are the most
well-known ones). Or try the newspaper “De Telegraaf“; it is still the best sold newspaper in the country, and coincidentally also contains most gossip.