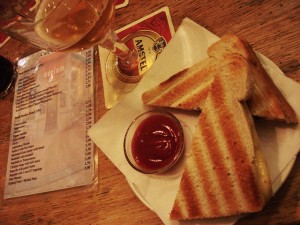 There’s not really an equivalent in English for “tosti”. In French, there is, though: “croque-monsieur”. “Tosti” apparently originates from the Italian “tosto” (from which “tosti” is the plural form), which is short for “tostato”, which is the past particple of “tostare”: to toast.
(Photo: Heather-D (flickr.com) – some rights reserved.)

A “tosti” is two slices of bread, by default with cheese and ham in between,
toasted all together. The ingredients may vary, but cheese (of any
kind) seems to be mandatory. If you order a tosti without further
specification, you will receive a ham and cheese tosti, mostly served with a small bowl of ketchup.

– “Ober, mag ik mayonaise bij mijn tosti in plaats van ketchup?” – “Vanzelfsprekend, meneer.”
(“Waiter, can I have mayonaise with my tosti instead of ketchup?” – “Naturally, sir.”)

Extra:
You have a “broodrooster” (toaster) and a “tosti-apparaat/ijzer”. They are different devices. The former is a device used to toast bread, especially by exposure to electrically heated wire coils. The latter is a device for making tostis by heating/toasting a ham/cheese sandwich between two metal plates. These plates are usually heated electrically.